The tournament is over. We have a winner!

Here is a statement posted by Frozn on Lambshack about the results of the tournament...

"Let me begin by thanking the entire Rune community for coming together to make this tournament the resounding success that it was, without your interest it would have never been possible. I'm proud to have been a part of a tournament that will be talked about for years to come.

Bringer of Pain won by a single frag in one of the longest and most intense battles that I've ever witnessed. I've been bad about making videos from my demorecs but I *WILL* convert this one as soon as possible."

"In the beginning when I wrote the FAQ I said there would be no prizes given out. Well, I'm left with a veterans blood europe server that will be open for all to enjoy for the foreseeable future. Zyroloth, having won against a large crowd of very tough European players deserves the admin pass there. Bringer, having organized the tournament, already knows it. It's the least I can do for the EU side whose sportsmanship I greatly underestimated.

Bringer and I, having organized the tournament together, were given especially tough fights so that favoritism would not be suspected, and yet he rose through the ranks and earned a solid victory over every rune player that stood in his way. And although he comes out the winner and world champion, Zyroloth still has the right to be called the current European champion. Fights across oceans can never be as fair as we wish they could.

But regardless of who won and who was defeated, everyone who showed up and enjoyed their match deserves credit here, and I thank you all for making this possible. The strength of the Rune community 12 years later, as demonstrated by these massive turnouts, assures me that Rune will be alive and well for many more years."
Posted by SacrificialLamb at 5:18 PM No comments:

Enjoy the goofy dog video. :)
Posted by SacrificialLamb at 12:17 PM No comments: 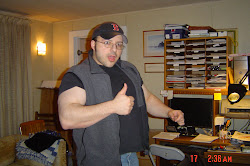